ABOUT THE ERROR IN THE MODERN ZODIAC

The purpose of this article is not to make a reclame of the fixed Babylonian sidereal zodiac. He does not need advertising because he is astronomical and has endured the test of time from antiquity up until today.

The role of this writing is to reveal the factual and historical truths associated with the tropical zodiac that is in use by the modern western astrology and to point the right choice that will directly relate to the reliability and validity of the horoscopes you make if you are colleagues, and your ability to helping people through them. 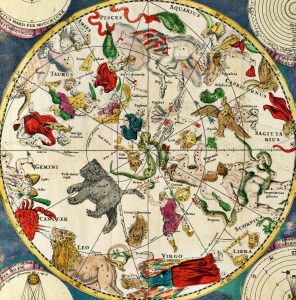 In previous articles including the video on the house systems and the zodiacs of the ancient, I explained what the sidereal zodiac is and what distinguishes it from the tropical.

Here it is important to imagine the zodiac as coordinate systems. Such as, to find and register the positions of the planets and the stars.

In short, just know that sidereal means starry, which is astronomical because it takes into account the living images and shapes of the constellations and the stars. It is based on the life spiral movement of the cosmos and the precession of the Earth, which as result creates the solstices and equinoxes. This is the zodiac of the ancients, which is still used today by vedic astrologers and by those of us who have access to astrological knowledge.

The tropical zodiac is the zodiac of modern western astrology. It does not take into account any of the above-listed factors. It is based on seasonal changes only; it does not record the precession, and thus, does not notice the existence of the solstices and the equinoxes. It also does not include the fixed stars and the constellations, because on the wrong coordinate system they would not have a valid application.

It was a very brief, but real description, and now I will bring you back to antiquity and then to Ptolemy’s time to see where the error is, to eradicate and correct it.

The ancient Babylonians also had a tropical ecliptic. It was different and had a different purpose.

The tropical ecliptic of the ancients

The tropical ecliptic of the ancients was similar to today’s, but it was divided into 12 sectors each of 30° and these conditionally called homes did not bear the zodiac’s names, but the lunar months as listed in the lunar calendar:

The spring equinox divided the sectors in two parts each 15°. This ecliptic was not zodiacal, but was designed to analyze and statistically record heavenly phenomena and omens.

Somewhere in 139 years. Ptolemy wrote Almagest and Tetrabiblos. There for the first time was spoken about the tropical zodiac that the modern astrology so confidently uses, only with the knowledge and without further justification, that if Ptolemy used it, then it is good.

Ptolemy based his tropical zodiac on the tropical ecliptic of Babylon and replaced the lunar months with the zodiac signs.

At the time of Ptolemy, the point of the spring equinox was about 0° of Aries. This equinox point of about 2000 years ago is still in use by the modern astrology.

Most importantly, at the time when Almagest was written in 139, according to the very accurate study of H. Vogt * of 1925, the point of the spring equinox was in 1°15′ of Aries. Therefore, based on Vogt’s analysis and Fagan’s subsequent series of analyzes, there is an insignificant difference of -0°06′ between the sidereal and Ptolemy’s zodiac.

So, as I pointed out above, Ptolemy wrote his work, when the spring equinox was about 0° Aries.

He has recorded this particular equinox point in his zodiac precisely, because that was the reality then.

There is also an additional evidence of a wrong reading and interpretation associated with Ptolemy’s Tetrabiblos1. On page 17th he describes the positions of the signs and the house systems, giving them astronomical, sidereal coordinates, such as the positions of the Cancer and the Leo, for which he explains that they are closest to the zenith and mostly to the north. This coordinates cannot be tropical.

Therefore, Ptolemy was a sidereal, not a tropical astrologer. He took into account the precession and the changes of the equinoxes and the solstices, and noted the vernal equinox for his epoch, that was about 0° Aries .

Modern astrology has a wrong reading of Tetrabiblos and Almagest. It takes 0° Aries for a stationary point and never moves it, omitting to register the life change of the starry sky, arguing with the seasonal orientation of the zodiac.

No, Ptolemy did not register the seasons, but the precession. He was a sidereal astrologer and took into account the changes of equinoxes and solstices.

It’s never too late to fix a mistake.

Certified astrologer from the academy for medieval astrology of R. Zoller