Contents of the text lesson:

After the profections, will introduce you another ancient predictive technique. Firdaria can be used together with the profections. Both as a combination have a high predictive value. Both predictive techniques are very practical because they are derived directly from radix and there is no need to construct additional charts. There is no such thing as a firdaria or profecion chart. They are easy to find and appear directly in the natal chart.

Firdaria are very much like Indian dashas. Those of you who are familiar with Vedic astrology certainly know them. The difference is that firdaria are based on certain rules related to planetary rulerships and apply differently to diurnal and nocturnal horoscopes, while the dashas reflect the lunar calendar.

Firdaria like the profections, are methods based on cyclicality in astrology. Some astrologers have called them Continuous Techniques. This is a technique for time management, where every moment of life is ruled by one of the seven planets.

It is believed that the name comes from the Greek firdar περιοδος – period adapted to persian- al firdariya. You will hear it pronounced in various ways – firdar, firdaria. This etymological meaning of the word does not mean that the firdaria come from ancient Greece or Persia. No evidence points to ancient Greece as the homeland of firdaria, and no one has ever justified the origin of them. Robert Hand claimed that the fact that the Babylonians had perfect ephemeris, which are now to be seen in the British Museum in the form of cuneiform tablets, they definitely used and knew about the planetary periods, no matter how they called them. India and Egypt have benefited from Babylon’s astrological and astronomical knowledge and this has been proven. In the beginning the lunar nodes did not occupy a place in firdaria. Their acquisition probably comes from Indian astrology. On this also we do not have any historical evidence.

The number of years for which the planets are responsible are the following:

The application of the above scheme is very simple. It shows which periods of your life are managed by a particular planet.

In daily birth you begin to count down from the Sun. Here’s how the periods look like periods and which are their planetary rulers:

The next periods begin again with the Sun for 10 years.

At night birth starts counting down from the Moon period as follows:

The next periods begin again with the Moon for 9 years.

All above periods are divided into seven more subperiods. Lunar nodes do not rule a subperiod and do not divide into subperiods.

The example is with Mars. He rules 7 years of our lives. Divide it into 7 sub-periods.

The Moon manages 9 years of our lives. We divide 9 into 7 sub-periods and we get that each sub-period takes about 1.29 years.

If you specifically look at the sub-periods of Saturn, they will look exactly in the below order of appearence. For a daily birth we begin the subperiods with the Sun, not the Moon with which we do if the birth was at night.

Saturn’s first sub-period of 1.57 years is of the Sun

Saturn’s second sub-period of 1.57 years is of Venus

Saturn’s third sub-period of 1.57 years is of Mercury

Saturn’s 5th sub-period of 1,57 years is of Saturn

Saturn’s sixth sub-period of 1.57 years is of Jupiter

Thus, a total of 11 years of Saturn’s rulership are distributed among the seven planets as their subperiods.

This is the principle of calculating and distributing the subperiods among all seven planets. The lunar nodes are not involved in the calculation.

On the application of firdaria

The rule is very close to what you can read on our site on the profections.

The planet firdar that rules the relevant period is applied to the radix (the natal chart) with the sign and the house which she manages. We need to interpret the character of the planet and the house and the sign that governs it in the radix. So we will know what this planetary rulership will bring us in the given year.

This means the following:

If you are 20 years old and your birth is at night, we know that Jupiter manages your period because he will manage from the 20th to 32nd years.

In your radix, if Jupiter rules the 7th house, his management will bring you good things about marriage, contracts, partnerships.

You need to consider how Jupiter is placed in the chart- his essential dignities, zodiacal state etc.. If he is afflicted or in a bad state, it is likely that his effects will go through a certain distortion and what he will cause will most probably be associated with certain difficulties.

Take into account the subperiods of the Jupiter firdar. For your 20th year, you will be in the Moon subperiod, because

Night birth subperiods of Jupiter will look like this:

The Moon sub-period will give you what the Moon means in your horoscope. Again you need to evaluate it by home, sign, phase – for the lunar phases we talk in detail in the video lesson about the Moon. The importance of the subperiod will add information to the basic period. 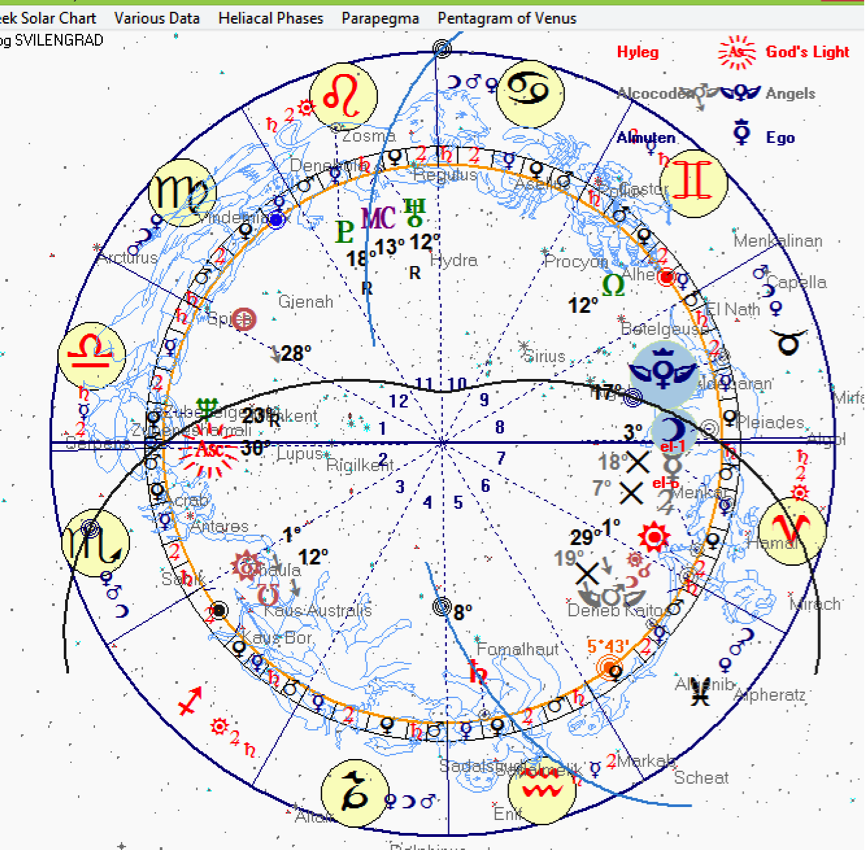 The horoscope is random.

The chart is nocturnal. For this, I remind you, use the following firdar for night horoscope:

You start counting down from the Moon periods as follows:

For the native we know she was married at the age of 31. Jupiter rules the years from 20 to 32. When she was 31, she was in the Mercury subperiod, because Mercury ruled the last years of Jupiter’s firdar:

We know that the rulership of Jupiter brought the marriage, because both Jupiter and Mercury are in the 7th house of her radix, which is an indication of a potential marriage.

I will give you just a brief example to be used as a guidance. If you determine which is the profected ascendant for the year of the native and see how it is placed in the radix, what it will bring, add the firdar to do a more in-depth analysis.

Here is an example with the same horoscope.

The profected ascendant for the given year is Gemini with ruler Mercury. Gemini rules the 9th house of the radix. In its significance, the 9th house is related to spirituality, higher education and distant journeys. It is the House of God.

The year will go just through the above-mentioned dominants, but due to Mercury’s position in the 7th house, we will add that the year will bring new contracts or partnerships.

Here, the firdar will add detail.

The 45th age of her life is ruled by Gemini and the 9th home and Gemini.

The 45th year is under the sun’s subperiod. It is the annual firdar.

The sun is also in the 7th house. This further confirms that the native will have new partnerships and possible contracts.

The moon is in the 8th home in Taurus in conjunction with Venus. This points to the opportunity for the native to have, in addition to new business partnerships, love experience that may arise as a result of business contacts due to the Cancer that the Moon is ruling and who is the manager of the 10th House. The new contractual relationships and contacts due to the conjunction of the Moon and Venus in the 8th house can also bring financial benefits.

Dr. Krasi Attasio DMA is Bulgarian sidereal astrologer of ancient astrology who gained her doctoral degree in cross-cultural communication from the UBI in Brussels, Belgium. She received her qualification in ancient Babylonian astrology from the astrologer, astrolab researcher and astronomer Rumen Kolev.